According to Phison, as drives become more sophisticated, they become hotter, so anticipate high-end PCIe Gen 5 SSDs to require active cooling through a fan.

Meanwhile, the business claims it is aiming to reduce the heat generated by its controllers since applications such as laptops and tiny desktops cannot handle huge coolers.

“There are lots of things that we are doing to keep the SSD power within a reasonable envelope,” said Sebastien Jean, Chief Technical Officer at Phison, in a recent interview. “But for sure, the SSDs are going to be hotter, in the same way that CPU and GPU got hotter in the 1990s. As we move to Gen5 and Gen6, we may need to consider active cooling.”

To improve capacity, 3D NAND flash memory adds layers or increases the number of charge levels that may be stored in a single cell. However, increasing the number of layers often lowers a cell’s physical size, which has a significant impact on its capacity to safely store charges (somewhat mitigated with the adoption of new materials). The move from triple-level to quad-level cell design, on the other hand, drastically lowers the number of program/erase (P/E) cycles that a cell can withstand. As both approaches of increasing 3D NAND recording density coexist, the signal quality produced by those NAND cells deteriorates. As a result, in order to handle such signals, SSD controllers must employ more advanced error correction algorithms. These advanced approaches employ low-density parity-check (LDPC) coding algorithms. Because they are often computation-intensive, SSD controllers have grown in complexity and compute capabilities in recent years. Because we won’t go ahead without those algorithms, controllers will get more competent and hotter. For their most complex controllers, SSD controller makers such as Phison use more complicated production methods. Still, it appears that the rate of adoption is slower than the rate of complexity gain, which is why, for the time being, SSD controllers for enthusiast-grade and enterprise/server applications continue to acquire thermal design power (TDP). Temperatures: 120 degrees Celsius for the controller, but only 70 degrees Celsius for the NAND ICs. An enthusiastic reader is aware that current CPUs and GPUs can withstand temperatures of up to 100 degrees Celsius and even more (albeit at the cost of silicon degradation, which performs reliably within specifications but loses its overclocking capabilities). The same may be said with SSD controllers. These guys, made by contract manufacturers like TSMC, can withstand temperatures of up to 120 degrees Celsius, according to Phison. The difficulty is that the controller warms 3D NAND ICs at 120 degrees Celsius, and they become substantially less dependable at temperatures of 75 degrees Celsius and higher. To avoid data loss, controllers often begin throttling at high temperatures, reducing performance.

Meanwhile, not all SSD controllers are complicated and resource-hungry; typical SSD devices have appropriate power consumption and temperatures. They fit into laptops and will continue to do so for the foreseeable future. As an added advantage, they will improve performance.

SSDs often enter critical shutdown mode when the temperature of the NAND exceeds 80 degrees Celsius, therefore cooling is vital for these devices. In the case of an M.2 form-factor, SSDs have two natural ways of cooling them down: conduction (via copper/gold contacts on the drive and the screw that fixes them in the position) and convection (dissipating heat into the air ). However, it is not enough to cool down high-performance SSDs, so they are already equipped with large heat spreaders and will need active cooling.

“I would expect to see heatsinks for Gen5,” said Jean in the context of higher-end drives. “But eventually we will need to have a fan that’s pushing air right over the heatsink, too.”

As SSDs gain capacity and performance, their controllers also need to gain compute capabilities and complexity, which in many cases mean an increase in power consumption. However, developers of SSD controllers — like Phison — are mitigating increasing needs for computing capabilities by using thinner process technologies and reducing the number of NAND channels and PCIe lanes. While we Phison expects mainstream SSDs to stay cool enough to fit into laptops, it envisions that high-performance SSDs require sophisticated cooling systems with a fan. 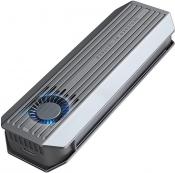